How to transform your In-Car digital experience on a budget

While your current car is not a connected one and doesn't have much of an infotainment system you can use, there is an option where you can transform that on budget if you don't want to buy the new model of your current car.

You bought your car several years ago and you have been excited about it for sometime. After a while you realise that the in-vehicle infotainment system fitted in your car is outdated and doesnt suit your digital lifestyle anymore.

You ask the car dealership to retrofit an advanced version of the infotainment system, but they hit you with the news that it cannot be retrofitted and if you really want it, you need to buy the new model of your current car.

Now you find yourself left with the following options: 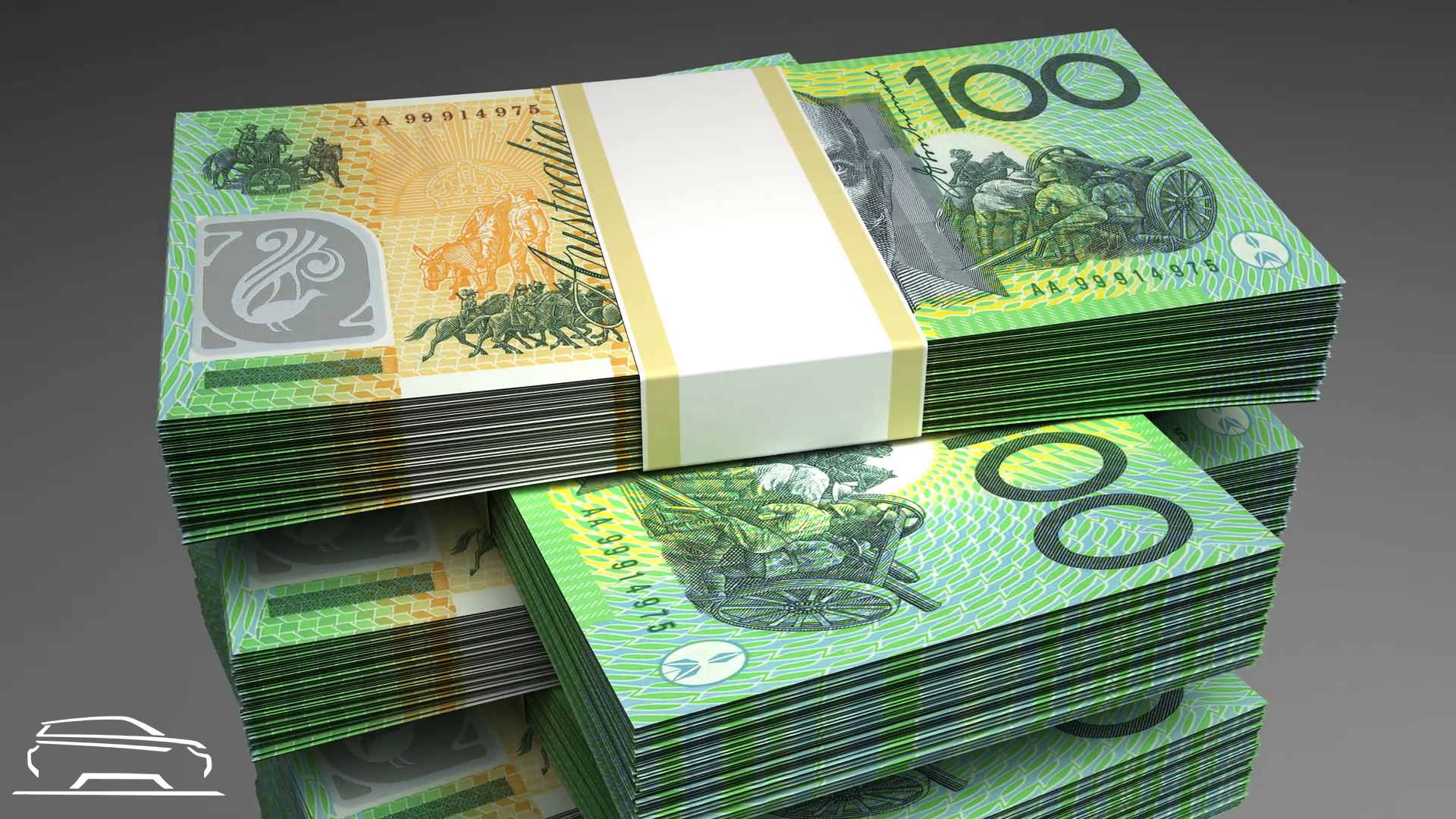 Option1 above is really an expensive one which could probably cost you from 15k to 40k based on the type of car you are driving. When you think about upgrading your car, you might notice that the upgrade will bring about a new digital infotainment system with several cool features and not much on the driving mechanical tech of the car as those dont change that much in a period of up to 4 or 5 years. 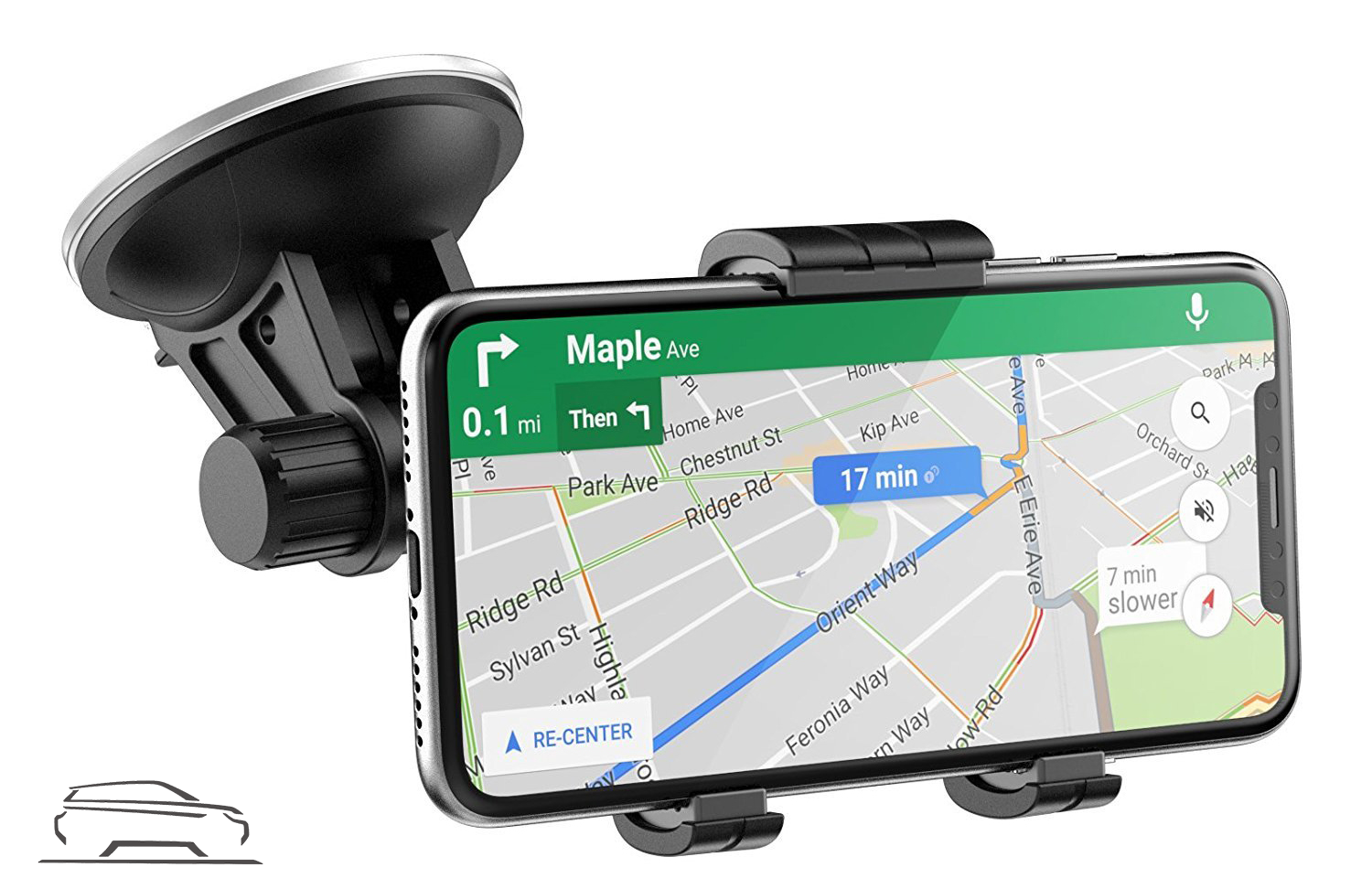 Option2, is a cheap option that would give you may be some of what you need. With this option you would be limited with the screen size of the phone you are using. Not as big nor integrated in the car as the factory fitted infotainment system that comes with the car. With this option, you end up with smaller screen and higher risk in-terms of driving. Smartphones use while driving has become a leading cause of car crashes over the last two decades.

In this article, I will outline the details of a third option that could give you something very similar to the latest factory fitted infotainment system if not better in some aspects and be integrated with the car network known as CAN (Controller Area Network).

We will be referencing Evoque 2016 throughout this article to detail the solution features for the third option. Throughout the article, you would gain great deal of knowledge on the network inside a typical modern car and how a typical infotainment system works inside that network.

The Digital experience of Option3 Solution

One of the key features of Option3 solution is Apple CarPlay. Apple CarPlay takes the things you want to do with your iPhone while driving and puts them right there on your cars built-in display in a safer smarter way. CarPlay features Siri voice control and is specially designed for driving scenarios. The Apple CarPlay you see here is for RHD (Right Hand Drive) where the steering wheel is in on the right-hand-side which is suitable for Australian Market. You can see that the home button and most recently used apps list are on the right-hand-side of the screen.

Apple CarPlay is one of the best infotainment systems experiences in a car if not the best. Unfortunately Blackvue Cloud App doesn't support Apple Car Play. If it is to be supported, you could have your rear Camera (Blackvue not parking Camera) view on the screen which could help you if you have stuff at the back that blocks your rear-mirror view. 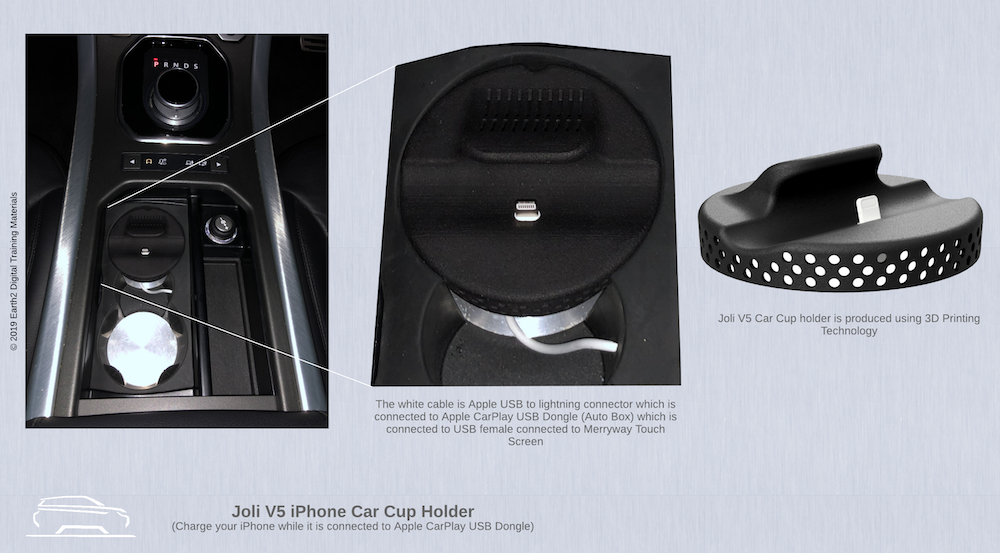 Joli V5 iPhone Car Cup Holder is designed by Jorn Munnik (https://joli.design) and produced using 3D Printing Technology. A very light option compared to Land Rover Cup Holder Charger. The docking is firmly placed in your cup holder and stays neatly out of sight when you don't use it. The USB cable from Merryway Head Unit which is connected to Apple CarPlay USB dongle is discretely hidden inside the floor console upper section. The lightening end of the cable comes out of a hole we have drilled at the bottom of the cup holder behind the holding rubber.

With Siri, you can make phone calls, listen to voice mail and return missed call without loosing focus on the road. You can even make conference calls.

Siri can read, reply to and send text messages for you. This way you can remain productive while maintaining a low risk driving. Audio messages gets played as well.

You can ask Siri to play your favourite songs or act as your personal DJ.

The Evoque version we are working on has a limited charging capabilities. It has one USB port that output 0.5 Amp under the armrest console box. A modern smartphone that supports quick charging would need probably above 2 Amp. If you have a family, you would be looking at a need of at least 3 USB ports that can output 2.4 Amp each. Anker PowerDrive 5, is a family-sized 50 watts/10 amps through five ports charges all your phones, tablets and other devices simultaneously while on the road. 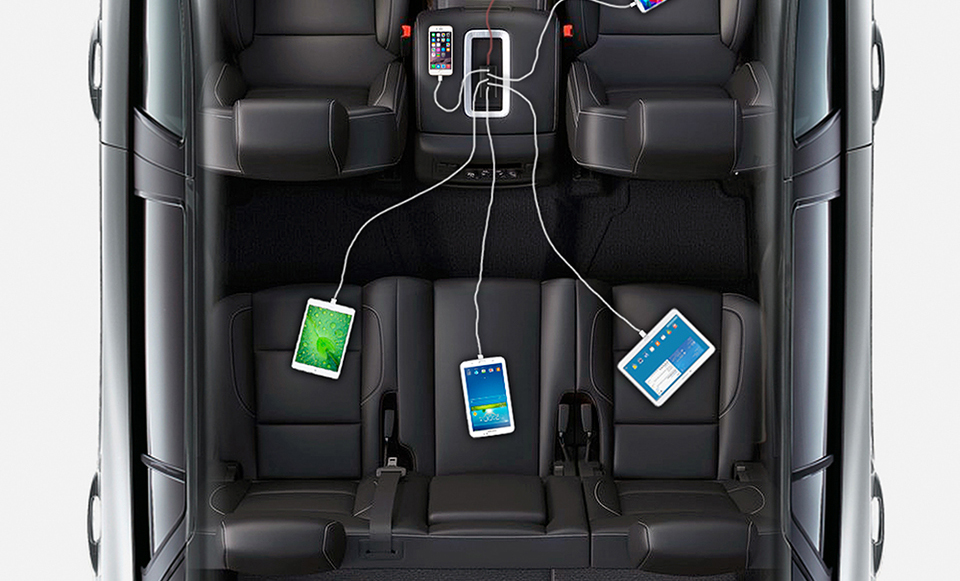 The current Evoque infotainment system would still be accessible from the new Head Unit. The only difference is that there would be no keys and all keys would be replaced by icons on the sides of the screen that you can touch to switch on or off. 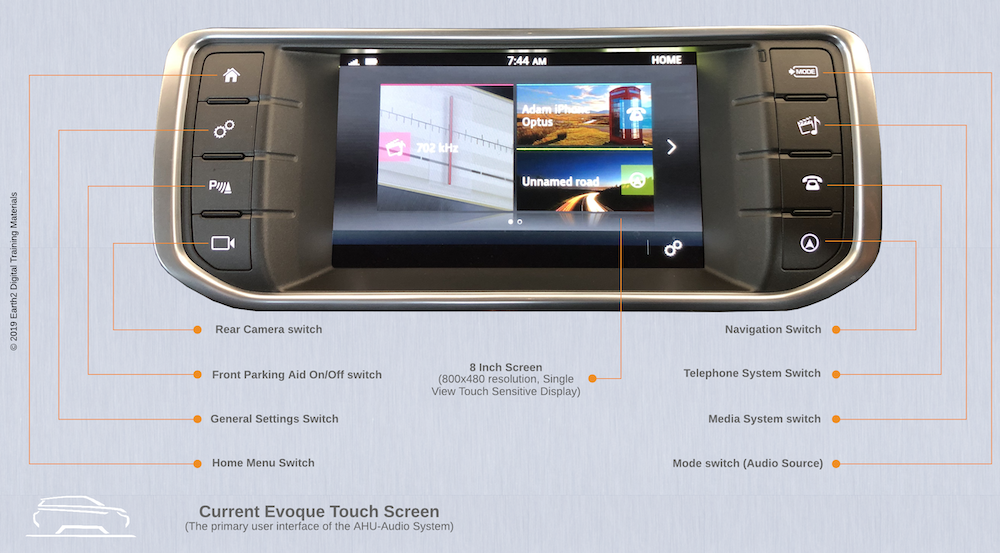 With this solution, we are keeping all of the existing Evoque infotainment system features, and adding the following new features. 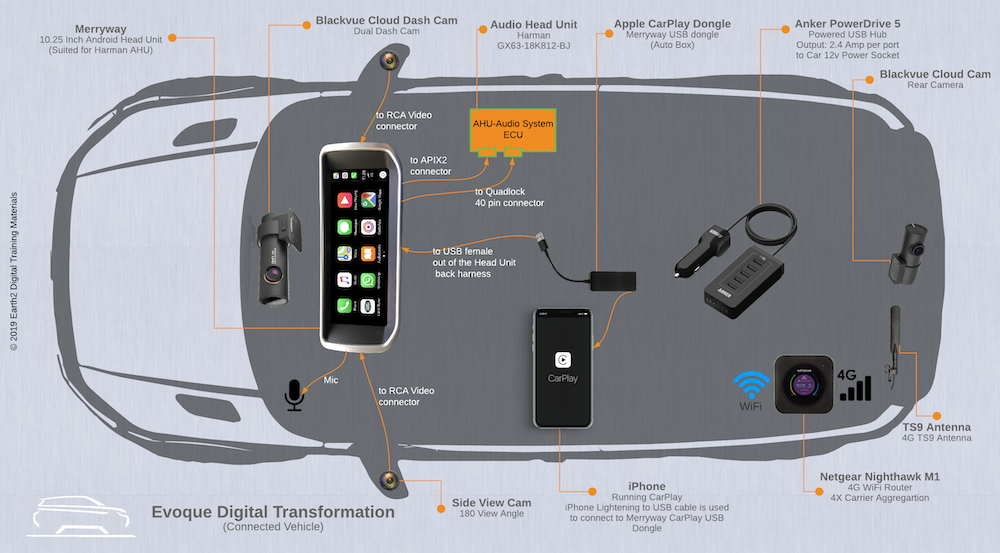 I did team up with Cameron (from http://oldjaguar.com) who is one of the best if not the best in Sydney to do Evoque retrofitting. He helped me in installing the most difficult component of the whole solution which is the Merryway Android based Head Unit/Screen.

The Android based Head Unit is manufactured by Shenzhen Merryway Technology Co. LTD (http://www.sz-mrw.com/eng/). Their Head Units fits quite nicely a particular model of a car to a level where you cant really tell if it was retrofitted or the car was upgraded to an advanced model.

The Merryway Head Unit is tapping into the 40 pin Quadlock connector connected to the AHU-Audio ECU. As part of that, it is connected to the car speakers (refer to my other article here for details). AHU-Audio ECU has a built-in Bluetooth capability which if paired with your iPhone, it can enable you to make calls and listen to music over this bluetooth connection.

With this solution you have 2 options for audio connectivity. 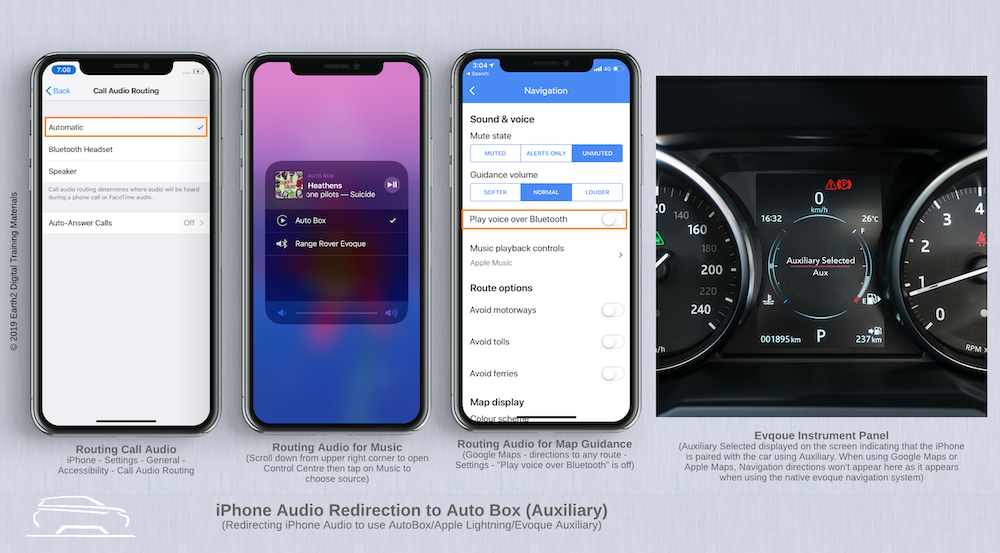 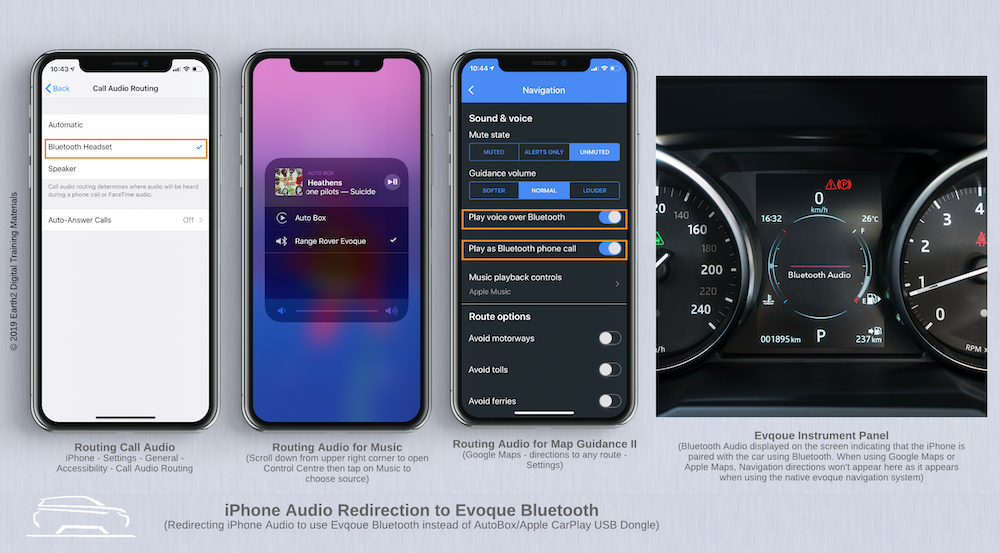 I couldnt find a way to route audio for Apple Maps voice guidance to Bluetooth connection, so I used Google Maps instead. In google maps you can route guidance audio by enabling both "Play Voice over Bluetooth" and "Play as Bluetooth Phone Call".

Regardless of which way you prefer for audio connectivity (Music, Phone, Maps Guidance Voice), the left steering wheel controls would still be working fine for audio control. 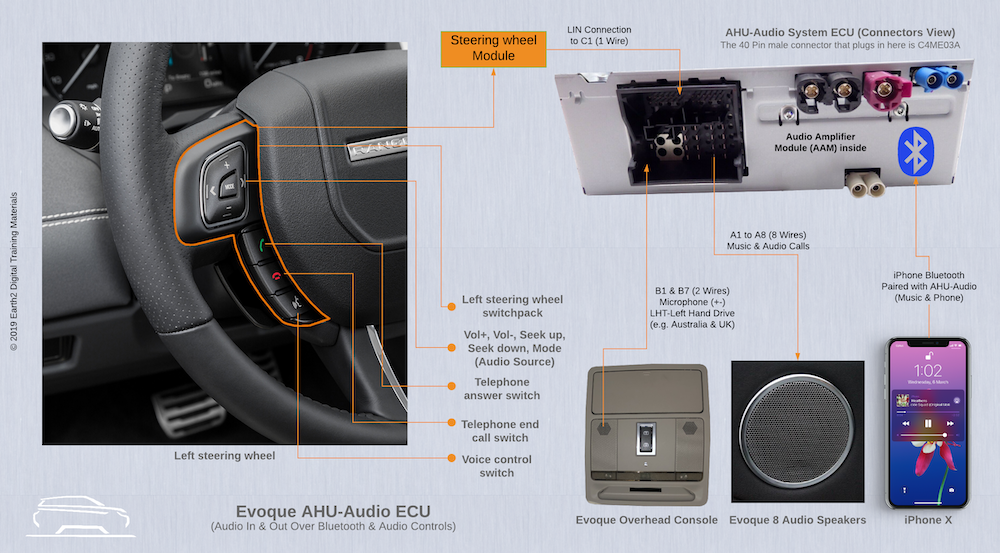 Technical details behind the solution

To understand the technical details behind the solution, please refer to my other article here about what is CAN bus and why do you need to care. 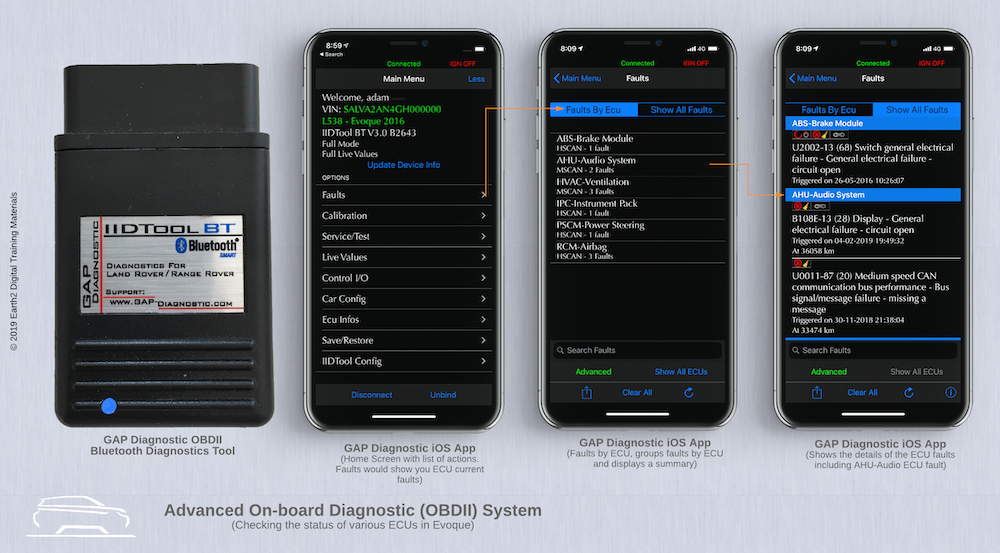 To clear alarms or check whats happening in your car after the upgrade or if you are on the road, the best comprehensive tool I found is the Gap Diagnostic Tool. Easy to use and can tell you a lot about your car. It can also save you a trip to service centre if you just want to clear an alarm after an issue with your car got resolved.

While your current car is not a connected one and doesn't have much of an infotainment system you can use, there is an option where you can transform that on budget if you don't want to buy the new model of your current car.

It is recommended, that these kind of retrofitting to be carried out by a qualified personnel.

Notice of Non-Affiliation and Disclaimer: The author of the article is not affiliated, associated, authorized, endorsed by, or in any way officially connected with any of the product vendors (Landrover, Harman, Merryway, oldJaguar, Blackvue, Netgear, Anker, Apple, Gap Diagnostic) mentioned in this article, or any of its subsidiaries or its affiliates.

Share article with others on your favourite social media network 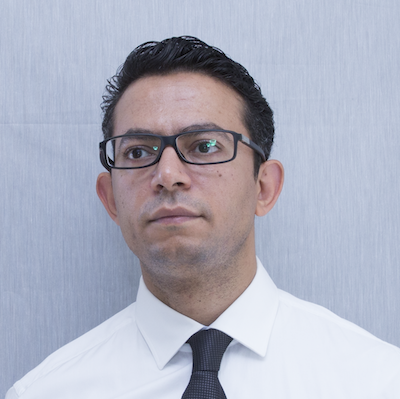 Adam is an End-2-End Solution Architect & Digital Transformation (DX) Expert across several verticals. He has more than 17 years of experience in design, development, and integration of end-2-end robust solutions with particular attention to security (APIs & Apps), high performance, scalability and high availability. 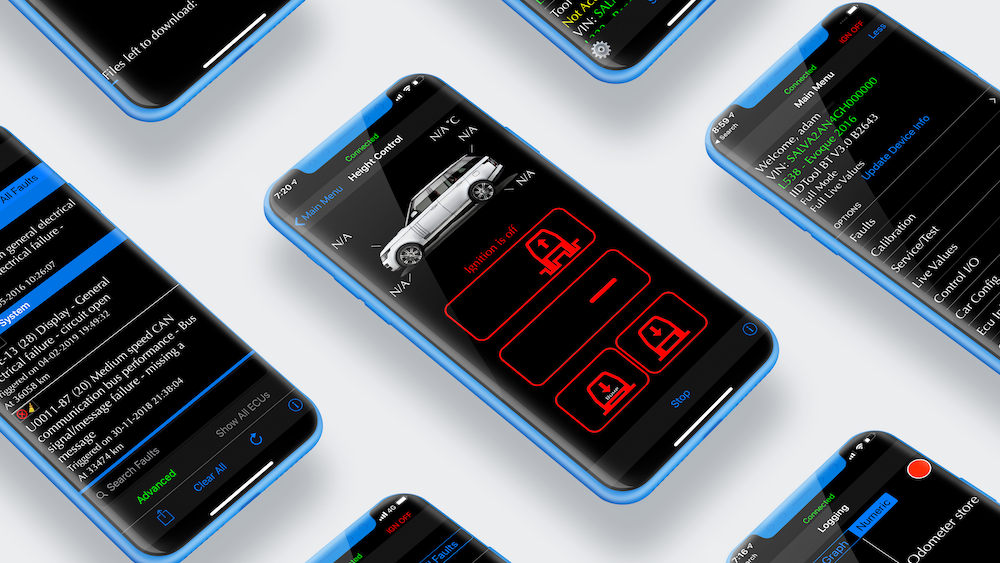 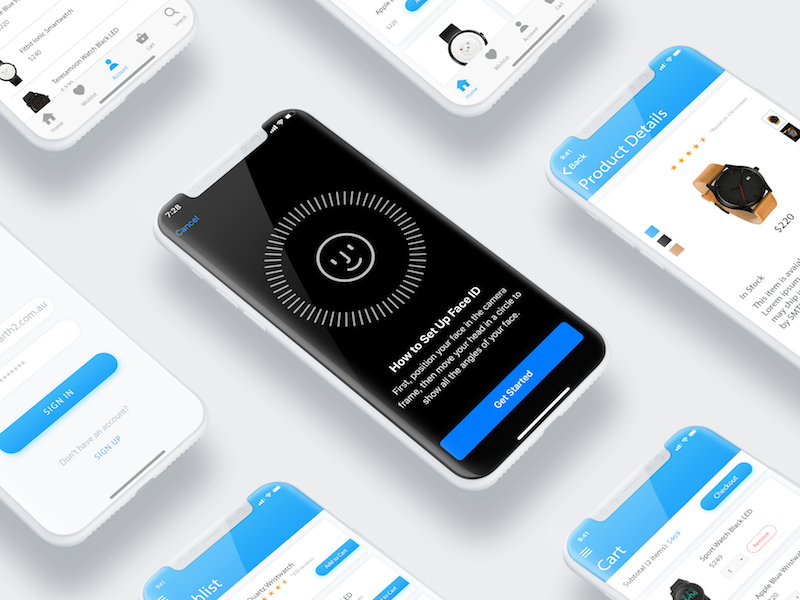 Does Multi-Factor Authentication in The Enterprise have to be Difficult? 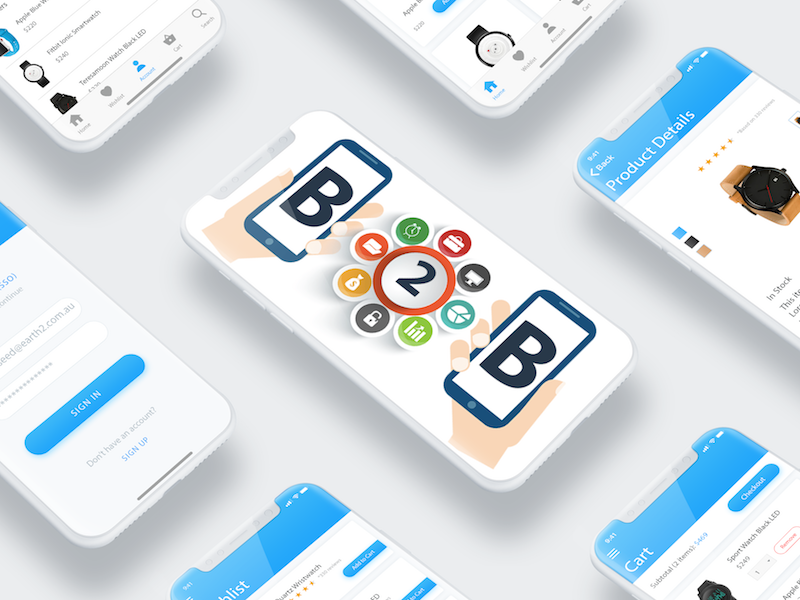 Is your API Security Strategy Channel-Based?